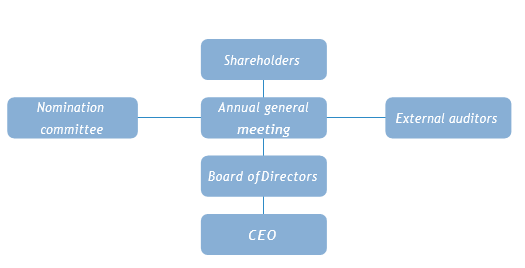 Sprint Bioscience, corporate ID number 556789-7557, is a limited company registered in Sweden with its registered office in Stockholm. The address of the head office is NOVUM, SE-141 57 Huddinge, Sweden.

The Sprint Bioscience share is traded on the Nasdaq First North Premier Growth Market under the ticker symbol SPRINT.

The aim of corporate governance at Sprint Bioscience is to make sure that the company is managed responsibly and effectively. Corporate governance in Sprint Bioscience is based on a combination of regulations, practices and internal policy documents. The regulations include Sweden’s Companies Act and Annual Accounts Act, as well as Nasdaq’s rules and the Swedish Code of Corporate Governance (“the Code”). Sprint Bioscience is listed on the Nasdaq First North Premier Growth Market and is therefore obliged, as of July 1, 2019, to comply with the Code. According to rulings by the stock exchange’s disciplinary committee and the Swedish Securities Council, there were no violations of the listing agreement or good stock market practice during the financial year.

The Companies Act contains basic rules about a company’s organization. The law specifies which bodies the company must have, what the tasks of each body are and what the responsibilities are of the people who make up the company bodies. It follows from the Companies Act that there shall be three decision-making bodies: the general meeting of shareholders, the board of directors and the CEO. The three bodies have a hierarchical relationship with each other. There is also a control body, the auditor, who is appointed at the general meeting of shareholders. The Code complements the law by imposing stricter requirements in some areas, but it also enables the company to deviate from them in accordance with the “comply or explain” concept. Internal regulations are primarily covered by the board’s formal work plan, the terms of reference for the CEO and the division of work for the board and CEO, along with the resolutions and authorization procedure. There are also internal policy documents that provide guidance on the company’s operations and for its employees.

In 2019, Sprint Bioscience’s compliance deviated from the rules in the Code with regard to the requirement for a review of the interim report, and the explanations are provided below under the heading “External auditors”.

On December 31, 2019, Sprint Bioscience had approximately 2,000 shareholders and the number of shares was 12,342,560. There is only one class of share and each share entitles the holder to one vote. All shares carry equal rights to the share of the company’s assets and profit. The single largest shareholder in the company is Första Entrepreneursfonden (all funds) with 12.3%. No other shareholder individually represents 10% or more of the company.

The AGM of Sprint Bioscience is usually held in May in either Stockholm or Huddinge. Sprint Bioscience will publish the time and location for the AGM as soon as the board has made a decision in this respect. Information about the time and location is provided on the company website: www.sprintbioscience.com. The meeting is the company’s highest decision making body and it is tasked with adopting the income statement and balance sheet and approving the proposed appropriation of the company’s profits or loss. The meeting must also decide on the issue of discharge from liability for the members of the board and the CEO. The meeting appoints the board members and chairman of the board, elects an auditor and decides on amendments to the articles of association. Furthermore, the meeting must decide on fees for the board and establishes the principles for remuneration to the CEO and company management.

To be entitled to participate in the meeting, shareholders must be entered in the share register (kept by Euroclear Sweden AB) no later than five business days before the general meeting and have notified their intent to participate in the meeting by the date stated in the notice. This date must not be a Saturday, Sunday, public holiday, Midsummer Eve, Christmas Eve or New Year’s Eve and it must not be earlier than the fifth business day before the meeting. Shareholders are entitled to have a matter dealt with at the AGM and to do so they must submit a written request to the board. The matter shall be raised at the AGM if the request has been received by the board by the date specified in the Companies Act.

The 2020 AGM will be held on May 13, 2020. The Sprint Bioscience website has information about how and at what time a shareholder must submit a request to have a matter dealt with at the meeting. The company will explore alternative options for holding the 2020 AGM given the restrictions that may apply due to COVID-19.

At the AGM on May 15, 2019, the following principles were adopted for appointing the nomination committee:

At the AGM on May 15, 2019, Öhrlings PricewaterhouseCoopers AB, with Leonard Daun in charge, was re-elected as the company’s auditor for the period up until the 2020 AGM. The company’s auditor reports to the board in connection with board meetings at least once a year.

THE BOARD AND ITS WORK

After the general meeting of shareholders, the board is the highest decision-making body and is responsible for managing the company’s affairs in the interests of the company and all of its shareholders and for facilitating and promoting a good corporate culture. This means, for example, that the board has to determine the company’s overall goals and strategy, establish guidelines for the company’s conduct with the aim of securing its long-term ability to create value and provide for procedures and systems for monitoring and evaluating the business and set goals.

The board shall ensure that the company has formalized procedures for ensuring compliance with the established concepts for financial reporting and internal control and ensuring that the company’s financial reporting is prepared in accordance with laws, applicable accounting standards and other requirements for listed companies. The board is also responsible for ensuring timely reporting and annual and interim reports Furthermore, the board appoints the company CEO.

A formal evaluation of the board’s work is carried out annually and communicated to the nomination committee as a basis for their work.

COMPOSITION OF THE BOARD

Board members are usually appointed at the AGM for the period up until the next AGM. In accordance with the articles of association for Sprint Bioscience, a minimum of three and maximum of ten board members should be elected at the AGM, with a maximum of ten deputies. At the statutory board meeting held after the AGM, the board adopts three documents that guide the board’s work and regulates the division of responsibilities and work between the board and CEO, the board’s formal work plan, the division of work for the board and CEO as well as CEO instruction. The instructions for financial reporting are also adopted at the statutory board meeting along with decision-making and authorization arrangements. If the board sets up committees within itself, the board’s formal work plan must state which duties and decision-making powers the board has delegated to the committees and how the committees shall report to the board.

The board currently consists of four ordinary board members without deputies; Rune Nordlander and Charlotta Liljebris were elected as ordinary members at the AGM on May 15, 2019. Fredrik Lehmann and Jan-Erik Nyström were elected as new members of the board. Rune Nordlander represents the company’s largest shareholder and is not considered to be independent. The other members are considered to be independent in relation to the company, the company management and the company’s major shareholders.

Important issues for the board during the year have been the strategy for commercializing the company’s drug projects, financial development, capital requirements and communication to the stock market.

ATTENDANCE OF THE BOARD 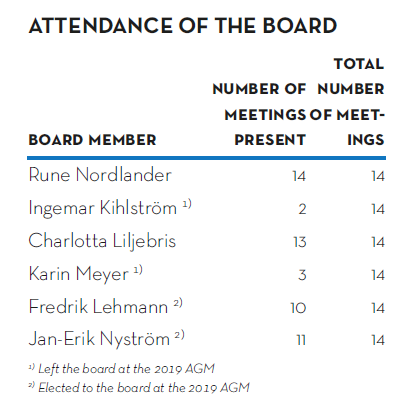 The board has concluded that in light of the scope and complexity of the business and the current size of the company, there is no justification for setting up separate committees for auditing and remuneration issues. Instead, these issues are dealt with by the board. Issues relating to risk management, governance, internal control and quality assuring financial reporting are handled on an ongoing basis by the company’s CEO and CFO reporting back to the board, at least quarterly when the board meets. The evaluation of the CEO and the handling of salaries and remuneration for the CEO and other senior executives are dealt with annually when the board meets individually without the involvement of the CEO or any other member of the company management.

Under the Companies Act and the Swedish Code of Corporate Governance, the board is responsible for the company’s internal control, the aims of which are to provide reasonable assurance that operational strategies and goals can be monitored and to protect shareholders’ investments. In this way, the board has overall responsibility for Sprint Bioscience having an organization and formalized procedures such that accounting, asset management and the company’s financial conditions in general are controlled in a satisfactory manner. The company’s internal control structure is based on the division of work between the board and CEO and is responsible for the existence of formalized procedures to ensure the reliability of external financial reporting.

The company has a simple legal and operational structure whereby the board continuously monitors the company’s internal control in connection with the ongoing reporting and, in light of this, the board has chosen not to set up a separate function for internal auditing. The board concludes that satisfactory control and risk management of financial reporting are achieved through the collaboration with the external auditor and the monitoring that is carried out, at least quarterly, in connection with board meetings.